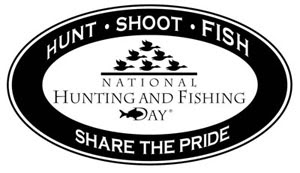 And Please Do Not Forget To Support The NRA.

You Can Read More About Hunting And Fishing Day Here

Below Is The Original Proclamation:

By the President of the United States of America

For many years, responsible hunters and fishermen have been in the
vanguard of efforts to halt the destruction of our land and waters and
protect the natural habitat so vital to our wildlife.
Through a deep personal interest in our wildlife resources, the
American hunter and fisherman have paved the way for the growth of
modern wildlife management programs. In addition, his purchase of
licenses and permits, his payment of excise taxes on hunting and fishing
equipment, and his voluntary contributions to a great variety of conservation
projects are examples of his concern for wildlife populations
and habitat preservation.
His devotion has promoted recreational outlets of tremendous value
for our citizens, sportsmen and nonsportsmen alike. Indeed, he has
always been in the forefront of today’s environmental movement with
his insistence on sound conservation programs.
In recognition of the many and worthwhile contributions of the
American hunter and angler, the Congress, by Senate Joint Resolution
Ante, p. 133. 117, has requested the President to declare the fourth Saturday of
September 1972 as National Hunting and Fishing Day.
NOW, THEREFORE, I, RICHARD NIXON, President of the
United States of America, do hereby designate Saturday, September 23,
1972, as National Hunting and Fishing Day.
I urge all our citizens to join with outdoor sportsmen in the wise use
of our natural resources and in insuring their proper management for
the benefit of future generations.
IN WITNESS WHEREOF, I have hereunto set my hand this second
day of May, in the year of our Lord nineteen hundred seventy-two, and
of the Independence of the United States of America the one hundred
ninety-sixth.

One thought on “To Celebrate & Cherish – National Hunting & Fishing Day”

THROUGH A HUNTER’S EYES WAS NAMED ONE OF THE:

LOVE BOOKS? – CLICK ON THE COVER TO SEARCH OUR USED & RARE INVENTORY BY AUTHOR, TITLE, KEYWORD, AND MORE. WE HAVE MANY HUNTING, FISHING, & SPORTING TITLES IN STOCK!

LOOKING FOR SOMETHING SPECIFIC? ENTER YOUR SEARCH TERMS HERE

A Journal of Wild Game, Fighting Fish, and Grand Pursuit